This is going to be a good one, kids!  First of all, I’d like to acknowledge that poop and pee are gross, and I’m not going to talk about them in this post other than when I just mentioned it just now.

Now that that’s over, it may seem as though I’ve gone off my rocker with this one.  And while you are absolutely right, it doesn’t detract from the fact that at the very least, I’m encouraging cleanliness. 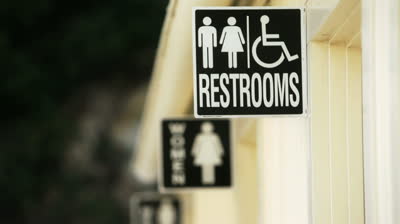 And yes, I do wash my hands after the bathroom because it’s necessary and I don’t want my mother to think she raised a vagabond. But that’s not a fun reason. So these are the fun (real) reasons I do it.

5. It’s fun to test out the power of the dryers.

If you see a powerful dryer and you aren’t psyched to wash your hands, you suck at life and don’t have fun.  There is no greater joy than watching your skin spread apart and make fleshy mountains because the dryer air is coming out at such a rapid pace.  Don’t tell me you’ve never put your face under it. You have or you will. End of story.

4. Someone else is doing it.

You cannot, I repeat, cannot be the person who walks out of the bathroom while someone else is washing their hands without washing yours. You may think you won’t ever see that person again, but low and behold, you’ll be making eye contact all the way down the elevator because he or she followed you out after your hasty, non-clean exit. And there will be judgment. So much judgment.

Half the reason I go to the bathroom is to avoid doing work or being where I am supposed to be.  Waiting for a date? Bathroom break.  Bored at work? Bathroom break.  Awkward sex scene while watching a movie with my parents? ABSOLUTELY going to the bathroom.  Washing your hands adds a few more minutes on to that time frame where you can just escape the awk and enjoy the situation.

2.  To reaffirm my hatred for motion-sensored and push-button faucets.

Like, really, what the hell, world? You really think that humans over the age of five can’t be trusted to turn on and off a sink? Why are you deciding how much water I need?  My hands are dry and they lather soap rather aggressivley and I don’t think that your stupid push-button faucet allows enough moisture to really get all the suds off and complete the task. LET ME DO IT MYSELF.

1.  Because I’m scared if I don’t someone will ask to smell my hands after I leave and will know that I didn’t wash them and then I will be forever branded as a nomad or social pariah who doesn’t adhere to any sort of societal norm or personal hygienic regimen.

This is a very real fear that eats away at me every day.  Whenever I think I can escape the bathroom without washing my hands I think of a scenario where someone immediately comes and smells my palms after leaving and I am found out for how disgusting and gross I am.  That fear outweighs the one of germs and other disgusting things that will happen to me when I didn’t wash them because I was just supposed to do so.

Why do YOU wash your hands after the bathroom? 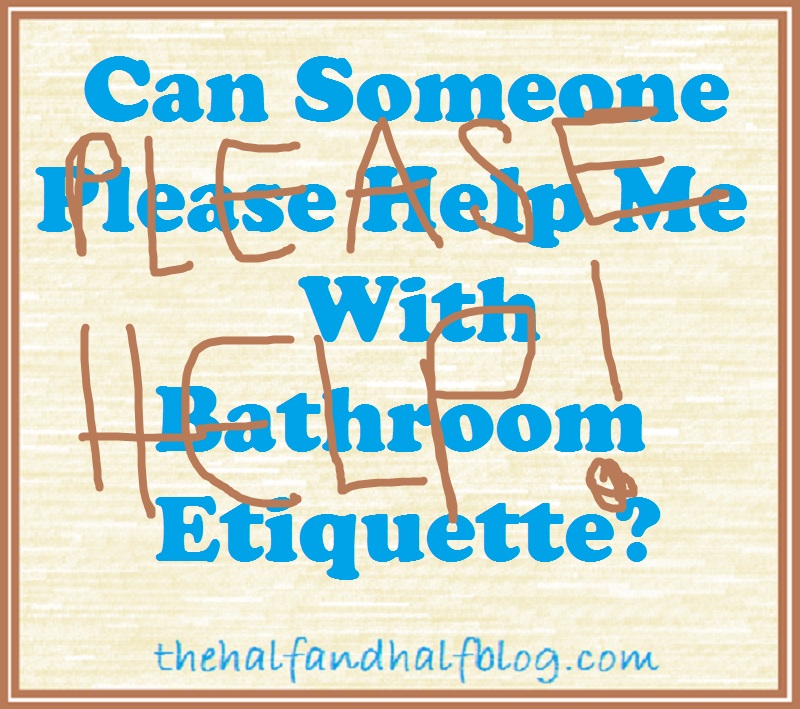 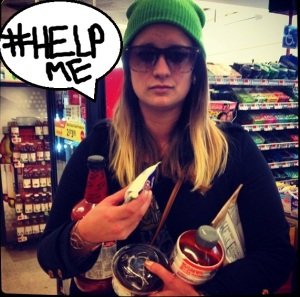 Real talk, I have no idea how I am supposed to act in a communal bathroom.

I’m not even going to lie, I immediately go into the handicap stall if it’s free.  A more spacious experience is a better one, in my opinion.

I could be missing the bigger picture here, mostly because I am not handicapped.  I do feel guilty, but at the same time, I don’t like small spaces because I was locked in a suitcase and a bathroom when I was younger.

Do I just suck it up and sacrifice space for sanity?  Or do I go for the gold and ignore the haters hoping to all heavens that someone doesn’t wheel in with the burning need to release their bladder?

Then if you are in the bathroom and you hear people come in, you have to look at the feet, right?  You need to know who it is, and if you do know who it is, is it weird to say hello?  No one wants eye contact through the stalls, that’s awkward as hell.  Keep your head down, analyze the foot traffic and make an assessment.

Does knowing who people are by their feet make you a weirdo?  Asking for a friend.

If you do know the person, but only a little bit, you’re not obligated to talk to them while you’re washing your hands right?  It’s like the rules of elevator etiquette apply here.  A nice, firm “hello!” and then a quick wash of the hands and be on your way.

My reasoning is because after you do establish a small talk conversation where you both mutually agree that it is either warm or cold outside and you wish that the week was over, it just becomes an awkward hang out until one of the two of you decide what safe topic to discuss next.

Do I have to make small talk in the bathroom with someone I barely know?

I get that after twenty-five years, these rules should have been clear.  But honestly, I’m navigating the sea of life, and I find myself severely off course more times than I can count.

All I do know is that you never, under any circumstances use the first stall.

I was nine when I got locked in a bathroom inside my own house.

And no, it wasn’t easy to free myself.  I was actually, truly, really stuck.

The following is a (slightly embellished) version of how I was deserted in my own home, left to fend for myself inside a desolate, personal bathroom prison.

It was summer.  The day in question was pretty hot, if I remember correctly.  My mother implemented this rule she liked to call, “Amish Time” during our summer breaks.  Meaning every weekday from 9-5pm, there was no technology – i.e. GameBoy color, Nintendo 64, AOL 5.0 – of any kind allowed.

The only exception to “going Amish” was when the US Open of Tennis was being broadcasted, because she wanted to watch that.  I cannot wait to be a parent and make self-benefitting rules.

I digress.  Since technology wasn’t allowed, we were reduced to remedial means of entertainment, like having conversations with each other, imaginative play, and embracing the great outdoors.  We always gravitated towards the pool because it passed the time extremely fast, and it was always fun to have our mom rate belly flops for hours on end.

It was after lunch; all four of us steamrolled down the hallway and onto the deck.  We waited for my mom to sit down in her chair under the umbrella, her idea spot for visibility and shaded protection, before we all made our entries into the shallow end.

We had been outside for a while when nature called.  I had to pee.

There is a bathroom very close to the pool; yet for some reason, unbeknownst to me in the present day, I chose to use the upstairs bathroom, located on the opposite side of the house.

I approach the bathroom, go inside, close the door.  Routine procedure. Until it wasn’t.

At the moment I closed the door, the handle on the interior of the bathroom fell out of the socket. From the inside, the door looks like this:

I immediately freaked out.  I look my new surroundings, there are four walls.  No windows.  A shower curtain and rod. And a door that will not open.

I yelled for probably eight minutes.  Immediately after screaming at nothing, I screamed at myself, “WHY ON GOD’S GREEN EARTH DID YOU PICK THE ONLY BATHROOM WITH NO WINDOWS?!”

My screams fell on deaf ears.  Everyone was outdoors enjoying the sunshine; a luxury I was no longer afforded since I went and trapped myself in this four-walled, shame cellar.

I was here, alone, stuck in the bathroom of my nightmares.  After about fifteen minutes of wasted tears, unheard screams, and pathetic cries, I rescanned my surroundings for something I could use to get me out of this joint.

I contemplated.  I saw the shower rod as a weapon; I yanked the curtain down from the wall with the brute strength of a toddler, and quickly disassembled the curtain from the rod. I had seen jousting before; I knew poles were deadly.  And this door was my opponent.

Only I had no idea that blunt, hollow, metal poles were not strong enough to break down a two-inch thick wood door.  I tried anyways.  I took the pole over my shoulder and rammed it as hard as I could into the back of the door.  There was a dent.

“YES!” I thought, “SMALL VICTORIES!” This dent was a small step towards freedom, and I quickly got into position to make another one.

I hit the door with the shower rod eight times before giving up from boredom.

That was it.  That was all I had.  No more ideas.  No more drive.  I was stuck.  I wrapped myself in the shower curtain and cried.  I thought about how long I could survive in there.  “Probably seven days without food, maybe four without water.” I guessed, “But I have a sink, a shower, and a toilet for the worst case scenario – hydration was covered.”

I planned out my missing persons ad, “Girl locked in bathroom, gone for weeks before found.”  It sounded sincere, I guess.

I had accepted my new living conditions, because I had decided that I may as well take a nap.  Putting my head on the floor, and using the curtain as a blanket, I prepared to snooze the time away in my new surroundings.

Until I heard my brother’s footsteps.  He was coming up the stairs; I was immediately filled with glee and adrenaline.

I shot up off the floor, shed my shower curtain blanket, and started screaming through the hole where the door handle used to be. “BRIAN! HELP ME. GET ME OUT OF HERE.”

He heard my cry and comes to my aid.  “Meg, get the door handle from the floor.”  He points to the handle on the inside with me. “Pick it up and stick it back into the slot where it was before.”  I picked it up and did as I was told.

“Now turn it.” And so I did.  Like magic, the door opened and I was freed from captivity. I ran outside, fell to the floor and hugged the ground. I was so happy to be out of there.  It was the worst twenty minutes of my life.

After helping me escape, Brian looks at me and says, “Yeah, I came up here before lunch and had the same thing happen to me.”  I was relieved I wasn’t the only one.  “I just used the door handle and got myself out.  Super easy if you think about it.”  The sad thing was, he wasn’t even gloating.  He was genuinely smarter than me.

I was trapped and immediately resorted to jousting my way out, but only after I wrapped myself in a shower curtain cape.  Brian just picked up the source of the problem and immediately let himself return to society as a functioning human being.

After the whole ordeal, I still had yet to go to the bathroom.  I used the downstairs one though, just in case.