Contrary to popular belief, we could all learn a thing from Rick Ross.

There’s a lot of talk about who is too fat or too skinny these days.  And personally, I don’t think we’re doing enough as a society to reward to the high profile pioneers who have middle fingers up and just don’t give a fuuuuuuuu**k.

Instead of shaming people for trying to squeeze into something that doesn’t fit, or critiquing men and women alike for their figures, we should be embracing the few people on this earth who promote and exude a confidence that we should all aspire to obtain.

In short, the body shame tunnel has a light at the end of it, and that light is hip hop swag master, Rick Ross.

Rick Ross is on a ruthless quest involving not giving a shit what anybody thinks.  It’s clearly evident because he’s just strutting his stuff all over music videos, and he’s doing it shirtless.  Just completely avoiding social norms but choosing to express himself through music sans shirt.

Whether or not Mr. Ross is choosing to spit jams without a shirt is just a larger (pun intended) ploy to get all of us humans to forget that he is, in fact, not really a good rapper at all, is still up for debate.  But the sentiment is there, and it’s reverberating throughout lunch buffets and potluck dinners around the world.

Aside from the fact that his talent in the hip hop community is measured at less than mediocre, he does express, whether he knows it or not, a very worthy cause: positive body image.

He loves himself, all of himself.  He is happy in his skin.  He’s confident.  He’s accepted this is the suit he will live in for the rest of his life, and for better or worse, he’s going to live life to the fullest.  And frankly, he’s doing something right.  This guy is fat, happy, and a goddamn millionaire.  Meanwhile, I’m over here slaving away at a 9-5 job while I count how many cucumbers are in my salad in order to fit into a bathing suit.

If all of us gave the same little amount of fucks Rick Ross gives about how he looks without a shirt on, the world would be a better place.

If all of us just accepted our bodies, our flaws, and shortcomings, people would be less inclined to point out the negatives in others and appreciate the positives in their own skin.

Instead of thinking about how many calories you need to cut, or how many imaginary allergies you need to develop, or how many times you have to get a salad when you’re out to dinner instead of just getting the cheeseburger like your heart wants, we should be thinking about Rick Ross, shirtless, in a giant house surrounded by fat stacks of money and the occasional siberian tiger. 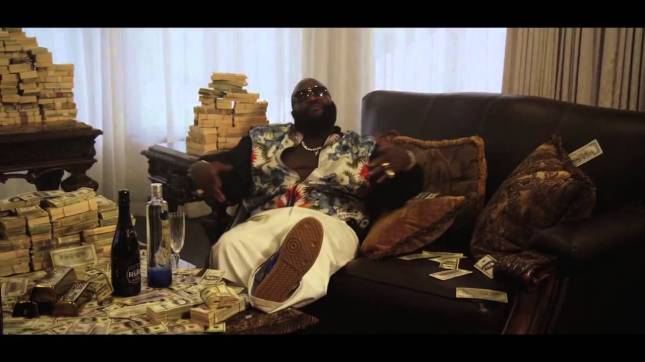 We salute you, Rick Ross.  We salute your commitment to maintaining a positive body image in a time where the media, faceless strangers behind a computer screen, and even real humans who have the audacity to criticize someone else’s body say things that make other people cower in fear.

Keep your shirt off, your head high, and send me a check for like a hundred grand for the promotional work I did on my own volition by writing this blog.

We should all strive to be a little nicer to one another.  We should all encourage each other and validate the good rather than overemphasize the bad.  Because positivity, self-love, and acceptance are three things that many people never attain in their lifetime.  And that, my friends, is tragic.

We all, as human beings, need to start recognizing that people are just that: people; with emotions, ideas, and energy.  We are not JUST our bodies, nor should we be allowed to think that we are defined by them.

I promise you will much rather be remembered as the person who helped people out of a funk, guided them through a depression, and built them up when they felt down than the person who criticized someone who was already weak, kicked someone when they were already down, and scarred someone beyond repair.

Love yourself, love one another, and the world may just turn its frown upside down.

What do you think about body image?  Do we have the power to change the way people perceive one another? 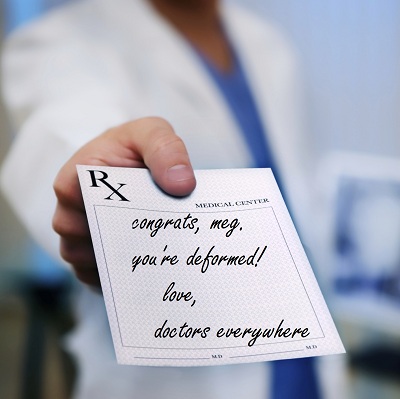 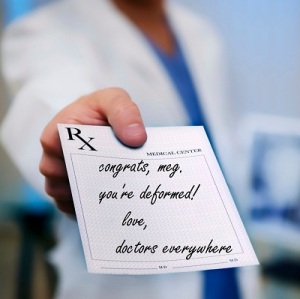 I didn’t know if I should speak out on my personal struggle with this particular malformation, but after reading this post on a similar subject, I felt it was my civic duty to enlighten the interwebs and at the same time, acknowledge my condition, so in case I become rich and famous, TMZ and E! News will not be able to use it against me.

It is also high time I take my responsibility as a newfound adult seriously and admit that I am not perfect.

In fact, I am deformed.

A month or so ago, my boyfriend was visiting, and it since was under sixty degrees outside we were able to hold hands whilst traversing around the city.

Sidenote: This may or may not be another unknown medical condition I need to research, because if the weather is above sixty-eight degrees, my hands sweat uncontrollably and I can’t lock fingers with anyone or anything.  I used to nanny and when I would walk anywhere with the kids, I had to assist them through the crosswalks by grabbing the collars of their t-shirts like dogs in order to avoid an unwanted sweaty palm debacle.

But anyways, I’ll look into that another time, back to the part where the air was the perfect amount of crisp so I could link phalanges without fear of being dumped due to aggressive hand perspiration.

He picks up my hand, examines it, and then says something that smacks me in the face (metaphorically) with a big, fat dose of deformed reality.

“You have toe fingers.”

It was at that moment I realized I did not have hands fit for a ring model, rather my mitts looked like I should be wearing socks instead of gloves.  I was horrified. 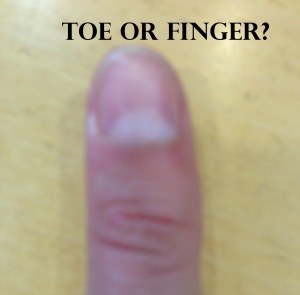 After he pointed out my enlarged nail beds and all encompassing fake fingers, I refused to give high fives. I didn’t want to shake any more hands.  It was embarrassing.  I was messed up.

Moments, maybe hours went by feeling singled out, but a side-by-side comparison of my thumb and my big toe revealed that his accusations were not in vain, they were actually true.

Then I realized how inexplicably good I was at handstands when I was a kid and it was probably a direct result of the Meg Lago toe finger epidemic.

I also conveniently remembered how committed I was to the Toe Sock trend in the early 2000’s, which makes sense now since they are essentially gloves for your feet.  I was a foot game pioneer at an early age, and no one sought to hire me for various endorsements.

Honestly, toe socks would probably still be cool if Nike or Adidas had called me when I was thirteen for a sponsorship.  Let that just sink in for a second.

I just want the world to know that Toe Fingers exist, and if you have them, announce yourself to the world like me.  We can start a support group, talk about all the things we wish we could do if we were only born normal.

We can wear gloves on our feet and socks on our hands, parading about like we own the world slapping soccer balls into goals and making foot fives the new craze on the streets.

Somebody get some toe gloves and hand socks, PRONTO.

I guess diversity is what makes the world turn.  We all have differences, and mine just happen to be the sheer fact that I have feet hands and I’m not afraid to show it.