You know the saying, “patience is a virtue?”  Well, when I was thirteen there was no capacity left in me to endure my flat chested, baby body, and I decided it was time I got boobs.

Now, before you all break out your early millenium spiral corded landlines and dial the DCF hotline to file a ten-years-too-late complaint on my mother, just know that any time you put a bunch of thirteen year old girls around things that resemble boobs, they’re all going to jump at the chance to enhance.

Case and point: At my thirteenth birthday party there were water balloons present.  We were all in bathing suits and there was not much going on up top, if you know what I mean. One thing led to another, and all of the sudden there were ten pre-teen girls resembling wet dog versions of Pamela Anderson running around my front yard. 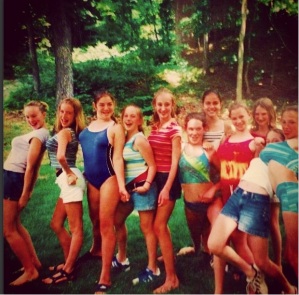 I was thirteen years old, and I couldn’t wait to be sixteen.  To get my license, responsibility, and the sacred freedom from my parents to stay out later than 9pm.

When I was eighteen I couldn’t wait to be twenty-one, to have my first (legal) sip of alcohol, to walk into a liquor store with my real ID and not be scared of getting arrested for poorly impersonating my sorority sister from Virginia.

When I was twenty-one, I couldn’t wait to be twenty-five.  To.. well, nevermind, I didn’t think anything fun happened after twenty-one, but I just wanted to be grown up and out of college.

Looking back, there are so many instances in life where I couldn’t wait for the future.  I had plans, visions, and aspirations for my next milestone.  Sure, it’s exciting to think about the car you want to drive when you get your license, or the way you want to celebrate your twenty-first birthday.  But in reality, we spend so much time wishing for the future, that we never really enjoy the present.

If there is one thing we can take away from childhood photographs, it is to remember to take each day as it is.  If you’re twenty-five waiting for thirty, you’ll miss out on all the opportunities and advantages your twenties have to offer.

Don’t be that thirteen year old girl wishing she was sixteen, then eighteen, then twenty-one. You’ll regret caring so much about your appearance, wasting time, your allowance, and your sanity on clothes that are too expensive and won’t fit in a year.

You’ll eventually get boobs and own as many bras as your little heart desires.  You’ll get that womanly shape you see on television, and you’ll critique it just like you do to the women in the magazines.

Don’t wish for things you don’t have.  I promise you the girl who actually got boobs in fifth grade cursed her mother’s mammary glands until all her friends caught up to her three years later.

Remember that life is a gift.  Cherish it.  Revel in it.

Next thing you know you’re twenty-five and are looking at pictures of yourself when you were thirteen wondering why you took growing up so seriously.

And you also hate your boobs.

12 thoughts on “I Gave All My Friends Breast Implants At My Thirteenth Birthday Party.”