Disclaimer: This is a true story about one time when I was hungry.  When I’m hungry, I do not think clearly. As a result, I may or may not have found myself romantically linked to the delivery man.

One night, in the cozy one-bedroom apartment where I had invited myself to sleep over, my friend Loren and I found ourselves miraculously hungry.  We had an entire day filled with activities – both good and bad – and a midnight snack was the sole solution to all of our problems.

“Burritos.” I demanded.  Loren agreed, nodding her head in approval.

We ordered our late night Mexican feast online, and got a confirmation and a delivery estimate of one hour.  But time moved at what seemed like a glacial pace.  Seconds barely turned into minutes, and even though the hour was drawing near, my cell phone was not ringing to signify that my post-dinner fast was over.

Loren looked over at me in realization, and informed me of society’s bi-annual observance of modern day time travel,  “It’s Daylight Savings, Meg, we just fell back an hour.”

“It’s technically 1am.” She mentioned, pointing at the clock, even though it clearly showed the little hand at the 2.  “Does this mean my burrito is going to take another hour?” The question came out of my mouth in the same tone that children use when asking for their mothers’ permission to eat thirds from the Thanksgiving dessert buffet.

“We should just call and find out,” she suggested in a rational, adult tone, “he could be on his way right now.”  Slightly panicked, I picked up the phone and dialed.  It rang, and rang, and rang, until finally, the answering machine picked up, “Hello, you’ve reached Burrito Taqueria, please leave a message.”

I was not prepared for this.  So I did what any sane, hungry, person would do in that situation; I left a message.

“Uhhmm, yes, hi, my name is Meg. I ordered two burritos about an hour and a half ago,” I sounded stern, I think, “I was just wondering if you guys observed Daylight Savings? Because I’m very hungry, and don’t know if I can wait an–” I hung up mid thought.

It was at that moment when I realized what I was saying was being recorded and could be replayed at anyone’s convenience, and my name was on the order. Ending the call was my only choice, even if it was mid-sentence.

I took a sip of wine, got a rush of adult-grape confidence, picked up the phone, and hit redial.

“Hello, Burrito Taqueria, how can I help you?” The man on the other end asked, politely, in a hispanic accent. “Umm, yeah, hi, I just called about five minutes ago,” I responded,  “I just wanted to ask if you had listened to any of your messages recently?”

There was a pause, and in a slightly concerned tone, he responded, “No, why?” I was relieved, and immediately pleaded with him,  “Could you please maybe just go back and delete the message I left on the answering machine” before adding this red-flag statement,  “but also don’t listen to it.”

“Why?” He asked, seriously confused with my request, and probably concerned that I was insane, “Was it offensive?”

“Truthfully, no.  It is just really embarrassing, and I don’t think I want that kind of audio being played at your leisure, sir.” I answered, “But I’m also calling because I’d like to know where my burritos are. It’s been over an hour,”  I added, to make my phone call sound justified, “and I know it’s Daylight Savings, but–”

“What is your name?” he interrupted, as if to look up my order. “Meg.” I answered, helping to give him all my information. “I just wanted to make sure there wasn’t anything wrong with the order.” I was sinking lower and lower into the couch, thinking of the worst possible scenarios in my head.  All involving me, alone, sans burrito.

“Hi Meg, I’m Hugo.” He introduced himself via phone line.

“Where are you from?” I wondered, out loud, accidentally. “I am from Mey-hee-koh.” He answered in an accent.

And then I did whatever happens when someone with an accent speaks to me.  I attempt to replicate it for no apparent reason, and never stop myself until it’s too late.

“Ahh, May-hee-koh.” I mimicked, then realized I was being a jackass as well as losing complete sight of why I had called in the first place.

Continuing my thought, I asked, “Hi. Wait, Hugo, do you not have customers right now? ” This was done in an effort to make him focus on locating my missing Mexican roll-ups. “Oh! Yes, I do!” He replied, discovering people waiting at the register.

“Let me put you on hold.”  Without waiting for my response, elevator music filled my ears.  About three minutes later, I hear a click on the other end of the line, “Hello? Meg?”

“Yes, I’m here.” I laughed while responding. I was just put on hold and I wasn’t even asked if it was okay.

“I feel bad,” he apologized, “I want to give you a free dessert.  Would you like a flan or a rice pudding?”

“Neither.” I said politely, still laughing at how I just voluntarily stayed on the line listening to elevator music, and was now back to casually conversing about dessert options with a man I had never met.

“Well, what do you want instead?” He asked in a rebuttal.  At that moment, I dug into my treasure trove of late-night cravings, and began to list them all off in a rapid fire sequence.

“Mozzarella sticks?” I wondered. “No, sorry.”

“Chocolate cake?” I just threw it out there.  “No. Only flan or rice pudding for dessert.”

I was running out of options. “Ice cream?” I asked, hopeful.  “No,” he replied, “but I can run to the gas station next door and get you some.”

“What about some Taquitos?” I concluded. “No, sorry. No taquitos.” He answered.  I didn’t know if he was joking or not. “You’re a Mexican restaurant,” I pointed out to him, “and you don’t have even one taquito lying around?”

“I’m sorry, but I will personally deliver your food to you,” he offered as a consolation, “I will leave here in five minutes, will you be awake?” Asking, as if to redeem himself in the conversation.

“Yes,” I shrugged, looking at Loren for confirmation, “we will be watching Netflix.” That statement was totally pertinent to his time management and delivery, by the way.  I look at my phone, noticing that the timestamp on the call was just about sixteen minutes.

After hanging up, Loren and I promptly begin to debrief the awkwardly long conversation that just occurred. “What do you think he looks like?” I wondered out loud, while picturing a tall, dark, handsome type in my mind. “If we have children, I will totally name them Taquito and Rice Pudding.” I started planning out this ridiculous imaginary life with Hugo, who I had never met, and would probably never see again.

We’re fifteen minutes into an episode of New Girl, when my phone lights up with a call from an unknown number.  “Hello?” I have the phone on speaker.  “Yes,” I hear him say, “I am downstairs.” I have never sprung up from a bed that fast in my life.  We run downstairs, tip in hand, ready to receive our long awaited food.

And then I see him.

He was not tall, dark, and handsome.  We would not be having two children named after appetizers and desserts respectively, nor would we be spending the rest of our lives together.  But he was holding my food, and that filled me with glee.

“Hi, I’m Meg.” I introduce myself, as I open the door and reach out to grab the bag filled with what I can only assume is my late-night treat, “How old are you?” I ask.  Because, at this point, why not?

He hesitates, “How old do you think I am?”  And now, standing in the doorway, face to face with the same man who told me he’d go next door to a gas station and bring me ice cream,  and I have no idea how to respond.

I figure my best shot is to give an age range and hope for the best, “I’m going to say, between thirty and thirty-five.” I was pretty confident.

Perplexed, he asks,  “Wait… What does that mean?” Just as confused with his confusion, I explain, “Well, it means you’re either, thirty, thirty-one, thirty-two, thirty-three, thirty-four, or thirty-five.” I simultaneously count using my fingers, making sure I’ve included all ages within this rage.

“Oh, well I am twenty-eight.” He says after giving me my food, “and I gave you some King Sized Junior Mints, my coworker did not want them.” This is in addition to the flan, just because.

“Oh, well, thank you for those.”  I make a gesture to sign the receipt in an effort to end this encounter and not have it become more awkward that it already was. 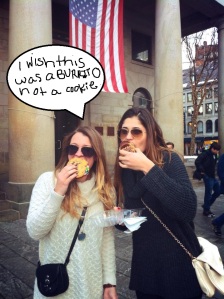 food on the brain.

I close the door, food in hand, and walked up four floors to the cozy apartment where I had invited myself to sleep over.  Loren and I ate burritos at 3am, watched the second half of that New Girl episode, and talked about how I just very, very recently made tentative plans involving the man who just delivered our food and two children named Taquito and Rice Pudding.

Because when you have a long day filled with activities – both good and bad – the sole solution to all your problems is a midnight snack.

5 thoughts on “Burritos After Dark.”