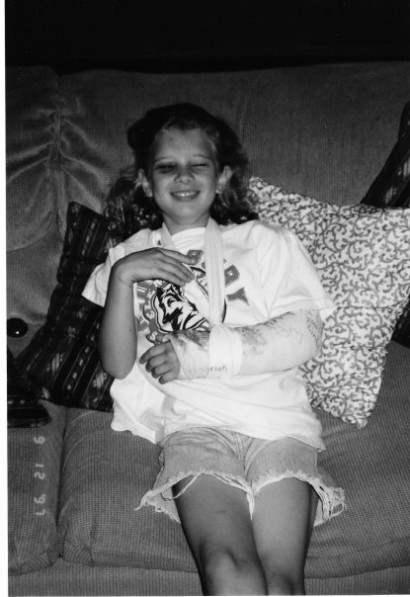 Well, it’s messed up because of genetics and my inability to correctly apply make up.  But that’s neither here nor there.

I’ll be the first person to admit that I am not fond of someone telling me what to do.

But being a twenty-five year old with extensive nanny experience, I realize that the rules and regulations established for us as children were meant to keep us safe.  But that never stopped me from giving the stop sign the middle finger as I rolled through it, or being disruptive to the point where I was actually kicked out of girl scouts.

Growing up with three younger brothers, I never really had a chance to become a girly-girl.  I was always playing in the mud, getting shot at with paintball guns, and learning the names of all the baseball players on the New York Yankees.

My brothers taught me to be tough, stubborn, and rebellious above anything else.

I’m not going to say I’m a criminal, but I have taken a few creative liberties when it comes to following the law.

Here’s a few that I’ve broken:

The Laws of the Road: I’ve gotten more than my fair share of tickets.

The Unwritten Law of Digestion: I don’t wait 30 minutes to swim.

The Drinking Age Law: I had wine at my first communion, broke that law in a church.  Does that count as two?

But these are all trivial compared to the time that I broke The First Law of Motion.

Sir Isaac Newton states that an object will stay in motion until acted upon by an outside force – basically if you’re moving, you’ll keep moving until something stops you, like a wall, or in my case, a big ass tree.

Let me set the scene for a minute.

My mom is a crazy runner, like six miles every other day.  My brother had just gotten this spiffy new Huffy bike with grippy handlebars and a comfy seat.  Like, way better than mine.  She asked me to accompany her on her run and I said yes.

Naturally, I took his bike instead of mine (so I guess I’ve stolen too?) and embarked on what was supposed to be a six mile adventure with my mom.

Enter the law of motion.

I ride out of the driveway and turn to go down the hill.  I knew in my head that I could roll down the hill faster than my mom’s two, tiny, Irish feet could carry her, so I told her that I’d meet her by the pond at the end of the road.  I wanted to feel the wind in my hair and the breeze on my face without interruption.

I was riding at a leisurely pace when all the sudden the force that interrupted my inertia joyride came out of nowhere… and then I broke my face.

Yup, stay in school kids.  Pay attention to science, or your teachers, or whoever tells you something and says it’s important.  If you don’t, you’ll ultimately end up breaking laws, and breaking laws causes you to crash your bike into a tree and end up looking like this:

Is that a bruise or are you just happy to see me?

Result: 6 broken bones in the face, two in the arm, and a popped blood vessel in my left eye.

Side note: Having a black eye, a broken face, and arm sling swag in my third grade school photo did give me some serious street cred.

But it also could have been because I told people I got into a fight over a Twix and they needed to “see what happened to the other guy.”

6 thoughts on “This Is Why My Face Is Messed Up.”